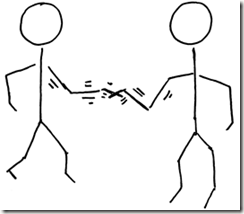 Charlie prepares, then facilitate a workshop in the aim of working through different sections of the Canvas. Charlie hopes to come Up with a change solution.

Charlie suggests a more pragmatic set of changes this time around. Charlie present the idea of preserving the majority of the teams existing processes, but enhancing them with a better prioritization mechanism. He also suggests putting the Operational Experts in charge of UAT. Charlie would like to place both analysts and developers together into a cross functional work cell to perform the analysis function. Charlie still feel strongly that the application maintenance group would benefit from more full-time team members working in a dedicated cross functional nature, so he leaves that in the target options.

Charlie then suggests putting Kanban on top of this process in order to empower the team to improve their agility over time. 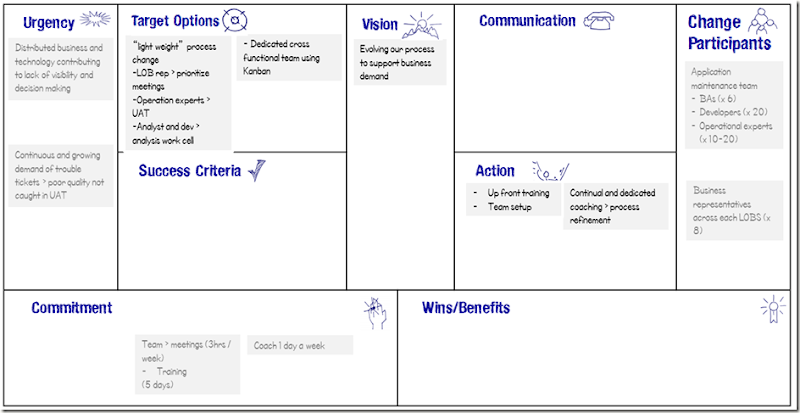 During the first negotiate change workshop it becomes clear that many of the developers do not want to commit to any decisions that will significantly impact the way they work. Most of the technical folks are reluctant to agree (or disagree) with any of the suggested target options concepts. 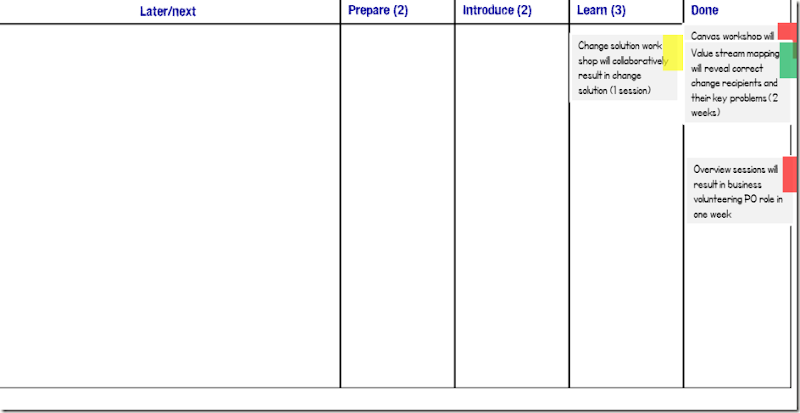 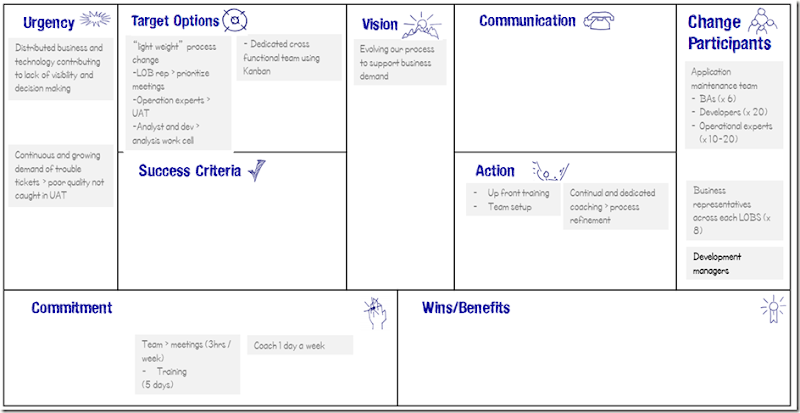 Charlie now prepares for, and then facilitates a change planning workshop with the intent of discussing what is required to realize this change.

Working with his change participants, Charlie updates the Action section of the Canvas to include Kanban set up and coaching. He also tries to secure commitment for the application maintenance team to take two days of Kanban training, and have all participants show up to all Kanban related sessions and meetings. Finally, he decides to update his own Commitment to two days a week as this group is larger than he had originally anticipated.

Charlie is hoping that all the listed change participants will Benefit from gaining deep Kanban expertise, he's also hoping that the team will be able to meet the continually growing demand, which would require a 100% improvement in throughput. While change participants are not entirely convinced that this is possible, they agree to defer to his enthusiasm. Defects also need to go down by an order of magnitude, given their huge rate, Charlie has put down a 200% reduction required. Again the team is not convinced but are willing to go with it for now.

Charlie also uses the planning session as an opportunity to discuss different Success Criteria. Given the team's relative inexperience with lean and agile methods, this is mostly an exercise in education and socialization. Charlie's change participant group consists of 53 members. In order for him to consider the change successful Charlie feels that a majority of these employees should be able to exhibit basic Kanban skills such as pulling work without being asked to, as well as follow other Kanban related work policies. He feels that a smaller but sizable portion should be able to create and implement new work policies. In terms of performance, throughput and quality need to eventually improve to the number listed in the benefits section. Charlie's gut tells him that this will take at least 10 months for these numbers to take effect. 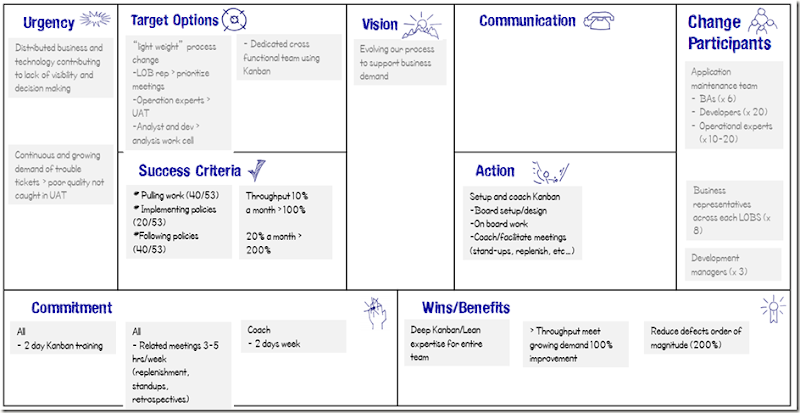 Charlie Is Having Trouble Getting Everyone to Engage

Despite the fact that the workshops have gone reasonably well, Charlie marks his improvement experiment as only partially correct. Some participants in his workshop seemed to be disengaged from the process. He's becoming increasingly aware that a core group of change participants are working hard to understand concepts, and help co-create the solution. However a larger portion seems to be distracted, and even resentful that these numerous workshops are taking place.

Charlie Focuses on His Champions

Charlie decides to segregate his Change participants into two groups, those that are showing passion for the change, and actively engaging on shaping it, and those who are more disengaged and more passive to the process. 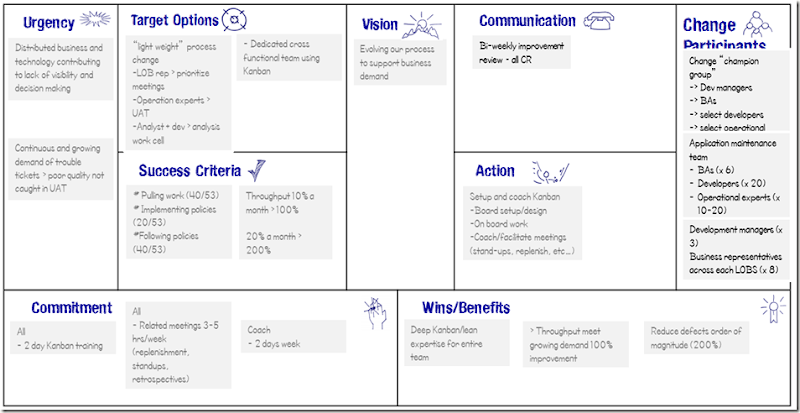 Charlie's holds a series of workshops with the selected change champions to carefully go through each section of the Change Canvas sharing supporting information when necessary, ensuring complete understanding, and gaining agreement that these change champions will be co-owners of the change.

For my next post, I'll talk about finally getting the change going with the validate adoption state.